A Legacy from God 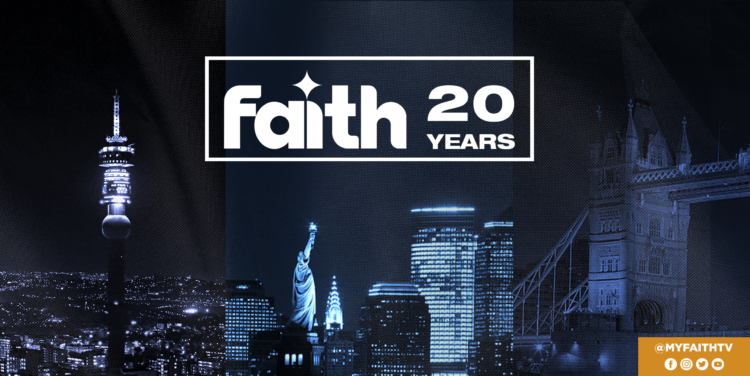 May 2022 marks the 20th anniversary of Faith Broadcasting Network. The preceding 20 years is a testimony to the goodness of God and the manifestation of the power of His Word and Holy Spirit.

Christian television on the continent of Africa has grown extensively since 2000, both on satellite as well as terrestrially. The forerunner to this explosion was the introduction of Christian television in 1986 via terrestrial broadcasts in the Eastern Cape. The late Dr Bernard Roebert, father of Dr André Roebert, headed up a small television station in Bhisho, capital of the former Ciskei. The vision for a television broadcast division as part of River Ministries was birthed early in 2002, when God firmly placed the desire in Dr André and Jenny’s hearts.

In 2002 Drs André & Jenny Roebert, started River Broadcasting Network (part of River Ministries), which broadcast Christian programs on the DStv Commercial Platform. The purpose for the network was to establish a 24/7 channel with exclusively Christian content. Since terrestrial broadcasts were prohibitively expensive to cover all South Africa, it was decided to rather pursue broadcast via direct-to-home (DTH) platforms. So, it was then that RBN started broadcasting on a shared, free-to- air space on an educational channel operated by Pretoria University. At that time the entire system was manually operated with two BetaCam machines being fed tapes by an operator!

Soon after the launch of the channel, RBN was contacted by one of the largest Christian television networks in the USA and offered free content. The approach of the president of this international network was always that the Gospel of Christ was free; therefore, he was happy to provide content to further the spreading of this Gospel over Africa. At a later stage the branding of the USA network was offered to the channel in South Africa and until the time of the president’s death, this remained in place.

With a new line-up of quality Christian programming, RBN was able to apply for, and obtain a channel on the national satellite bouquet of Multichoice Africa. After 16 years and a rebranding, FAITH BROADCASTING NETWORK now provides choice Christian content to satellite, terrestrial and digital viewers across the continent of Africa and beyond.

Through the years the premium Christian channel on DStv341 was complimented by the addition of two other channels – FaithTV and FaithUK (Sky UK 594). FAITH BROADCASTING NETWORK now potentially commands the attention of more than 60 million viewers across its satellite channels, as well as a global audience through its digital platform of FaithNOW.

Today professional FCC facilities broadcast the signal from the FAITH BROADCASTING NETWORK headquarters in East London, South Africa, as well as Miami FL in the USA.

In addition, various studios have been built from where programs are recorded and broadcast live to television audiences. With the advent of social media, FAITH BROADCASTING NETWORK now incorporates fully interactive live broadcasts (internet streaming and social media platforms) in addition to the satellite transmissions.

Since 2016 FAITH BROADCASTING NETWORK is also distributed more widely on digital platforms through an app via AppleTV, ROKU, Android TV, FireTV, XBox One and Tizen on the FaithTV channel. Additionally, the three satellite channels are streamed through web- based platforms. This increases the exposure of FAITH BROADCASTING NETWORK to potentially 264 million viewers worldwide.

In March 2020 the world awoke to the catastrophic outbreak of the COVID19 virus, which quickly escalated to a global pandemic. On March 18, 2020, the signature live program, FAITH TODAY LIVE, started broadcasting live from the USA. These broadcasts have since continued uninterrupted, and at time the time of writing 688 shows have been broadcast live to the entire viewership. Truly a beacon of hope and light in a chaotic environment! We see the hand of God in the establishment of Faith Broadcasting Network and the impact it has on the spiritual temperature of all its viewers.

The work that God has started 20 years ago is far from finished, and what was established over that time is now in place as a legacy to future generations of programmers, producers, and viewers! We are excited to be a part of the continuing journey in this plan of God.

Even though day, month, or year alliterations border on the passé, the circles I move in have declared ‘Fabulous February’. By this we allude our belief that the month of February is going to be somewhat special, a little out of the ordinary, and probably exceptional as far as our encounters with God go! Traditionally, because of Valentine’s Day, February has always been considered – at least in the Western…

Psalm 37:4 (TPT) – “Find your delight and true pleasure in Yahweh, and he will give you what you desire the most.” In this scripture verse there are three words that stand out to me the most, and from a first look are integrally connected. The words are delight, pleasure, and desire. So, I thought it may be a worthwhile pastime to ponder these (some selah moments) and take encouragement from…

The expression “over the top” or OTT for short, is most often used to indicate a person, object or event being something beyond the normal. It is over-and-above, way-beyond-normal, above-and-beyond, beyond reasonable limits, and outlandish. One may be inclined to ask where this inclination towards OTT expressiveness comes from? Anything from a flamboyant person dressing in an OTT-fashion or purchasing a house or car that would be considered OTT and extraordinary. The simple…

by JOSIAH MALAN We often hear the word “legacy” being thrown out in conversation, but more often than not our understanding remains superficial. Legacy is something that impacts generations, cities, businesses, ministries, and families. A legacy is a powerful gift to leave behind, even more powerful than an inheritance. While an inheritance is something that could be spent and used up, legacy is a spiritual investment that continues to bear…

Our daily walk of faith should include 3 essential steps: repentance, restoration and revival. It all starts with repentance, that of changing gears from self (help, reliance, plans, doing good and so forth) to top gear with God (His character, plans and ways!)

Speak what you believe

Your world is not framed by what the world says, your world is framed by your words. It doesn’t matter what’s going on with the economy or within your nation. What matters is what’s coming out of your mouth! If you don’t speak the word of God, you can believe all you want; it will never come to pass because you don’t speak what you believe. _ J.B Whitfield “By…

I recently received an unsolicited mail in my inbox, declaring that the month of April is National Decorating Month. It was interesting since our home is currently undergoing various decorating changes, not because of any national day, but simply because we needed to “tidy up” and make the home look “cool”. So, sanding, scraping, painting and general deep cleaning is the order of the day for us. It was then…

This week is an important week for the Body of Christ. The Church is coming together and in one voice declaring ENOUGH is enough! We will see churches open on Easter weekend in the name of Jesus! Join us LIVE from tonight, 6 pm CAT – 8 pm CAT, Sunday – Wednesday Broadcasting LIVE from CRC Pretoria, with ministry leaders from across different denominations and you – the church, reaching…

Old out – New in by Waldo Malan Changing an old habit takes some work and effort and it certainly doesn’t happen in a day. The biggest mistake anyone can make is to believe that breaking an old habit is simply a matter of a change of mind or heart. Yes, certainly it starts there, but to get lasting results it cannot stay there. So, the first step is to…