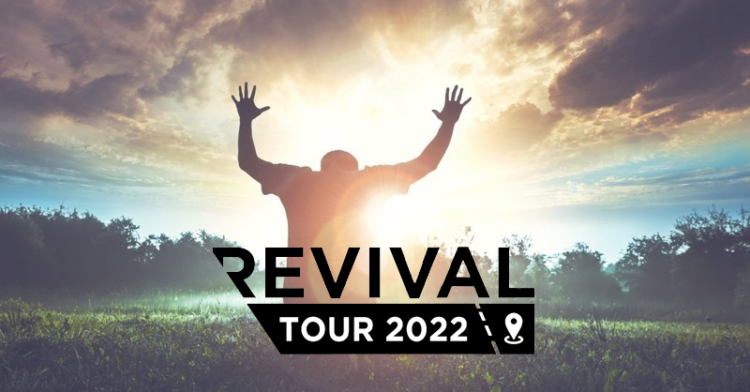 The Revival Tour kicked off in Johannesburg on Sunday, October 9 at Ps Nicky van der Westhuizen’s church, NBCFC. The place was packed with people with people in both the main auditorium and in the overflow – the atmosphere was electric! Ps André spoke on our heavenly reservoir and the response was overwhelming! That evening the service moved to Christian Family Church attended by around 2000 people hungry for revival. The morning meeting on Monday was attended by about 600 people; Roy Fields ministered, and the anointing flowed into a powerful time of ministry! Monday night Ps Nicky ministered, and awesome healings and miracles took place!

The entire team was treated by the owner of “The Waffler”, one of the restaurants in the CFC mall, to some delectable waffles and ice cream! We prayed and blessed all their staff – He was so touched by the time we took to bless him and his staff that he took the full payment we had given him for our meals and sowed it right back into the Revival.

From Johannesburg the tour moved to The Jesus Dome in Durban. The attendance was incredible, with people lining up at the doors for each of the meetings. The time in Durban was kicked off by Ps André speaking on the coming cloud (glory of God) with powerful ministry time! The second meeting saw Roy Fields ministering the word, while powerful healings and miracles were manifested at the third meeting led by Ps Nicky.

The tour went on the Emalahleni for the 8th stop, where Ps André preached a powerful message on the woman with the issue of blood, and the example of attaching yourself to Jesus! The response was wild! After Ps Nicky delivered a powerful message on the Presence of God, some of the miracles that took place was a lady who came in with a walker and got healed – walking out without it, and deaf ears healed…just awesome!

The meetings in Polokwane were awesome! The people were so hungry and receptive, and the attendances were outstanding! For those attending, and those who were watching the live broadcast, it was sight to behold to see Roy Fields doing a cartwheel on stage during the song “I am free”. Ps Jenny ministered at the morning meeting (The Treasure Within) – and hands were laid on everyone in the building. Ps Nicky ministered in the evening and the worship erupted – spontaneous worship, every member of the band on the floor, the crowd caught up in the Presence of God and the fire of God started breaking out all over – the glory of the Lord was in the place – just awesome! The final meeting was attended by Julius Malema and his wife.

Praise the Lord!!! South Africa is in REVIVAL!!!  We have just come through our 8 city Revival Tour across the nation and have begun our 8 day Revival Celebration in the Great Faith Dome, in East London (Buffalo City)! To say we have been overwhelmed by the response to the Revival Tour, would be an understatement.  We have literally been blown away at the excitement of the crowds of Faith…

Praise the Lord for His faithfulness and mighty power to REVIVE His church in these last days!  His resurrection power is alive inside of us and we cause it to flow into every area of our lives when we take Him at His Word and choose to believe! October 22 is marked for REVIVAL!!!!  Hallelujah! No matter where you are in the world – you can follow the trail of…

The simple definition of ‘supernatural’ is a manifestation or event attributed to some force beyond scientific understanding or the laws of nature. This means that we describe supernatural event, or being, or manifestation as an experience outside our ‘normal’ life experience. September has been declared just such a month – a month where we will experience the supernatural expression of God in our lives! Praise the Lord! We are entering…

Abundant August Praise the Lord!  To everyone who attended Revival 4.0 in the Great Faith Dome, in Buffalo City, South Africa – we want to thank you for making the trip to celebrate with us!  It was undoubtably one of the most glorious weeks we have had yet! To those who watched the services over the social media platforms or on television, we believe the power that was manifest and…

FREE AT LAST!  Hallelujah! We are certainly living in times where the church of Jesus Christ is being awakened to live and operate in the freedom and authority we have been given through the finished work of the cross, and our covenant relationship we have with our God! We are so excited to celebrate this freedom with all our partners in South Africa, as we officially take occupation of the…

Can you believe this year has already reached the half-way mark? While it may be true that the world around us is reeling from the adverse after effects of a world pandemic, God has and is proving Himself faithful to His nature and Word! He is as generous as He is personal! Let’s take a look at the generous nature of our God. To begin with, let’s consider His Name….

A Legacy from God

FAITH BROADCASTING NETWORK – 20th ANNIVERSARY May 2022 marks the 20th anniversary of Faith Broadcasting Network. The preceding 20 years is a testimony to the goodness of God and the manifestation of the power of His Word and Holy Spirit. Christian television on the continent of Africa has grown extensively since 2000, both on satellite as well as terrestrially. The forerunner to this explosion was the introduction of Christian television…

Even though day, month, or year alliterations border on the passé, the circles I move in have declared ‘Fabulous February’. By this we allude our belief that the month of February is going to be somewhat special, a little out of the ordinary, and probably exceptional as far as our encounters with God go! Traditionally, because of Valentine’s Day, February has always been considered – at least in the Western…

Psalm 37:4 (TPT) – “Find your delight and true pleasure in Yahweh, and he will give you what you desire the most.” In this scripture verse there are three words that stand out to me the most, and from a first look are integrally connected. The words are delight, pleasure, and desire. So, I thought it may be a worthwhile pastime to ponder these (some selah moments) and take encouragement from…

The expression “over the top” or OTT for short, is most often used to indicate a person, object or event being something beyond the normal. It is over-and-above, way-beyond-normal, above-and-beyond, beyond reasonable limits, and outlandish. One may be inclined to ask where this inclination towards OTT expressiveness comes from? Anything from a flamboyant person dressing in an OTT-fashion or purchasing a house or car that would be considered OTT and extraordinary. The simple…